We Find Lugers a Good Home

LUGER OF THE MONTH 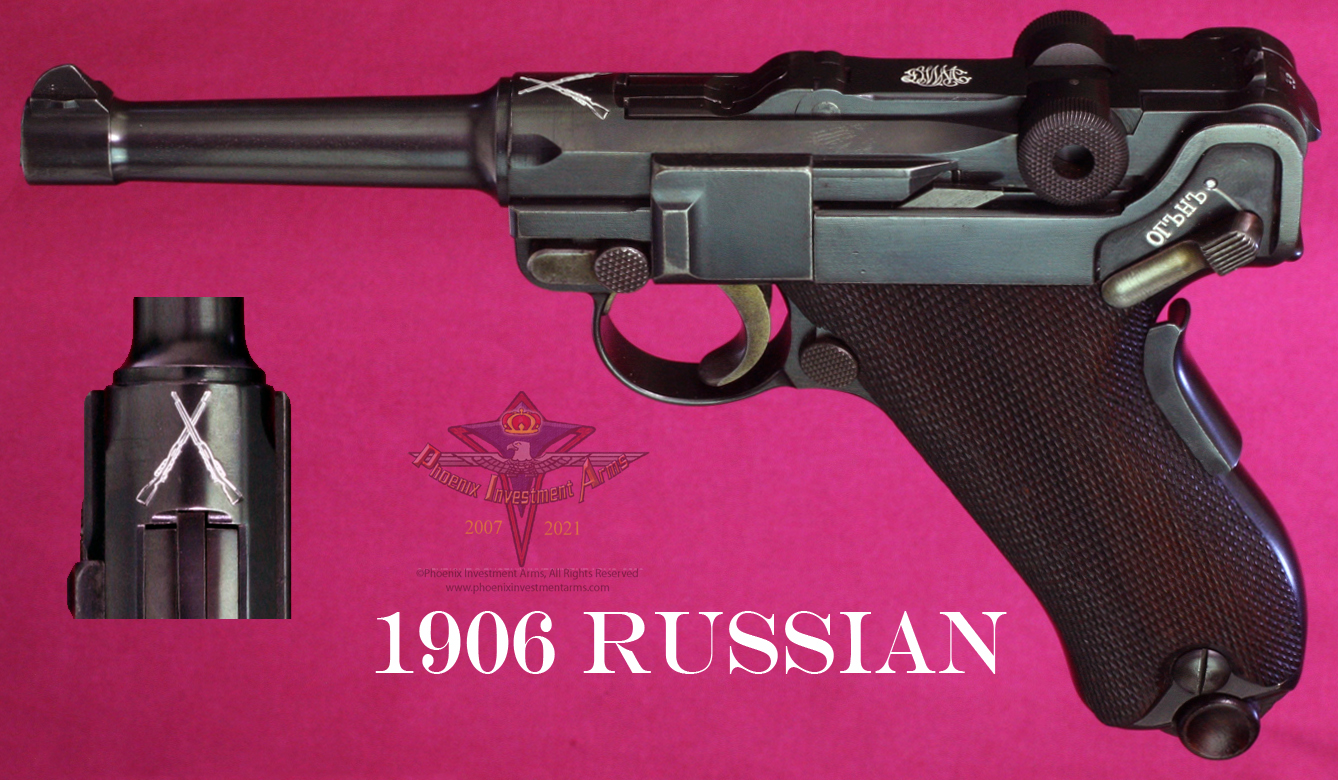 This is a 9mm Luger manufactured by DWM for Russian sale with the crossed Nagant rifles over the chamber. This is one of the most sought after and rarest of the Lugers that are collected. Reported to be not more than 1000 Lugers in this contract group, most of these Parabellums have been lost to war. (2153)

This is a 9mm Luger manufactured by DWM for Russian sale with the crossed Nagant rifles over the chamber. This is one of the most sought after and rarest of the Lugers that are collected. Reported to be not more than 1000 Lugers in this contract group, most of these Parabellums have been lost to war. (2153)

This very rare variation was Manufactured by DWM (Deutsche Waffen und Munitions Fabriken), in 9mm with the standard 100mm barrel and designated by collectors as the 1906 Russian. The frame is a new model with the long sear and fixed rear sight and no stock lug. Two of the four elements that share this designate this variation from the "Bulgarian" is the extractor marked in old Cyrillic Russian "Пълнъ". The thumb safety is the old Russian "ОГЪНЪ" for safe which also appears on the Bulgarian model. The serial number is low, 833/1000. It appears to have the early rust blued original finish with the customary parts strawed. 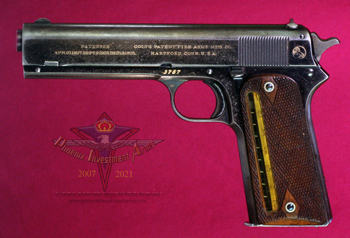 1905 Colt Cartridge Counter: Factory authenticated, one of to delivered in March 2006 for the military test series. When DWM presented the 1902 9mm Cartridge Counter Colt was not to be out done.While the 1911 .45 semi-auto was an evolution this is super rare transitional. 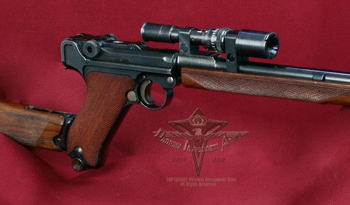 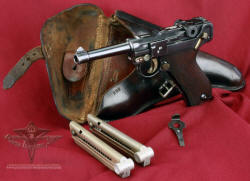 1925 Simson Full Rig: Wow! An all matching 1925 Simson with two matching magazines and a period holster matched to the gun and a proofed loading tool This is a beauty.

1906 Portuguese Royal Navy: Split lot contract gun with only 800 delivered before the abdication of Manuel II. See the Story at More Pictures. Very Rare
This is a beauty.

MUST HAVE BY COLLECTORS

1900 American Eagle Test Luger 1/1000: There is an "American Eagle" from the US Great Seal over the Chamber and the DWM (Deutsche Waffen-und Munitionsfabriken AG) on the first toggle link. The serial number falls well into the range of the US Military Test Guns from the trials conducted in 1901 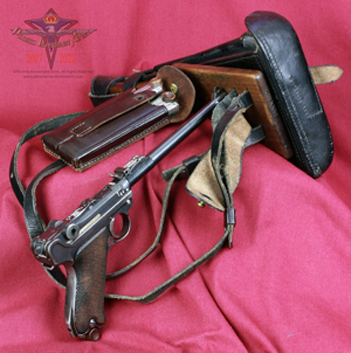 1939 Swiss Military only 29940 built & refinished by Bern Factory, a jewel at bargain price. This gun was issued to the Swiss military in approximately 1939–44 for use in the armed services and was then retired and sold with the first option to the soldier that possessed it. 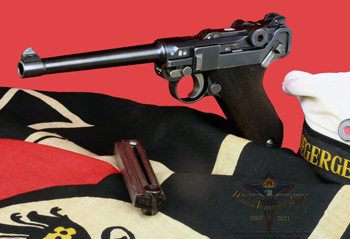 1908 Imperial Navy: With the growing tensions on the continent Germany was re-arming thereby updating their weaponry. The decision to adopt the Parabellum was the magic that made the Luger the Most widely recognized gun in the world.

1918 DWM Post War: Made at the end of 1918 after the war; identical to the war models but without the Imperial Proofs, one of those one-off prizes. 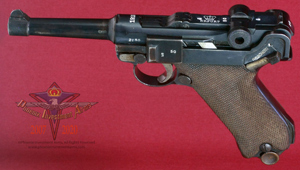 1918 Erfurt: Made at the Royal Arsenal at Erfurt this end of the war model is the perfect gun for anyone who enjoys the proof marks at the Erfurt factory employed during their time of production from 1911 through 1918.
(3004) 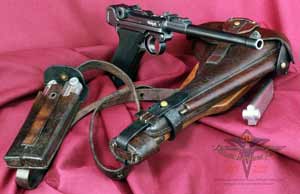 1935 Persian Artillery Full Rig:  Mauser made two artillery model in 1934-35 for a contract to Iran (Persia) and Siam in very limited numbers. Here is the complete rig with all-matching Farsi lettered Parabellum, a holster and matching stock, straps, studs with a cleaning rod, loading tool & a two magazine pouch. 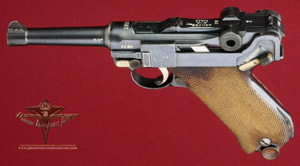 1918 Erfurt WWI: Made by the Royal Arsenal at Erfurt Germany for the Imperial Army at the end of WWI. These were the most proofed guns & a delight for the collector.  See picture album at 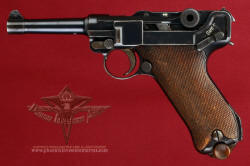 1922 DWM Safe & Loaded- This is a 1922 undated model DWM (Deutsches Waffen Und Munitionsfabriken Co) Manufactured Pistole-08. This was a commercial five digit serial numbered Luger for export to the US in 7.65mm (.30 Cal Luger). English markings on the gun. 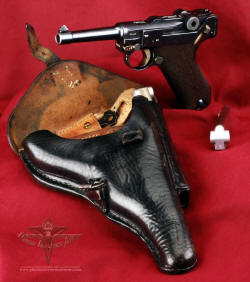 "1930 Simson & Suhl" Between the World Wars only Simson was permitted to build Lugers for the German Army. These rare Lugers were commercial quality and this is a all-matching rig with a Parabellum with two matching magazine, proofed loading tool and a Weimar holster. Just minty.

1906 "Russian" The crown jewel of anyones squeeze grip collection the ultra rare "Russian" with the chamber marked crossed rifles and old Russian alphabet markings. A must see & a must have for the rare gun collector. Click below on More Pictures. 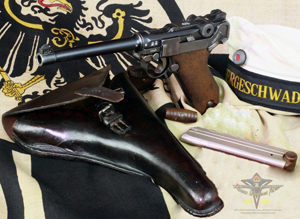 1917 Imperial Navy Luger: This is a real gem for the WWI Navy collector with a very clean all matching Parabellum, a Navy Holster and a period cleaning rod. The last of the Navy's produced before the end of the war when the fleet was bottled by the British it has avoided the salty seas.
SOLD (2045) 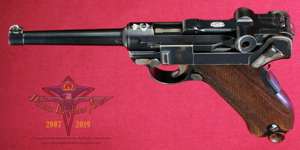 1900 King Carlos I: This is a one of 30 (1/30) test guns sent by DWM to Portugual in 1906 for the army to test. Beautifully struck initals of the King and the gun passed the tests. See More Pictures to learn the story.

1906 Swiss Shield & Cross: This is a 1906 Model Swiss Contract manufactured by DWM. In 1909 the Swiss Federation changed their logo (heraldry) and the weapons they had ordered were now required to be switched to the Shield and Cross.

1900 Swiss Commercial: This is the classic 7.65mm Luger with the old frame, 120mm pencil barrel, long sear, steel spring flat extractor and dished toggles to name a few of the characteristics of the early 1900 Luger. 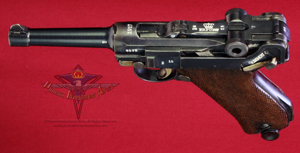 1917 Royal Arsenal at Erfurt: 9mm WWI very coveted Luger with the Crown Erfurt Proofs. Erfurts are collector's dream with the many proofs through out the gun. See more at:

1900 American Eagle: This is the classic 1900 that began the entire Luger Legacy. Flat top, long frame, pencil barrel and the deep American Eagle from the US Great Seal. 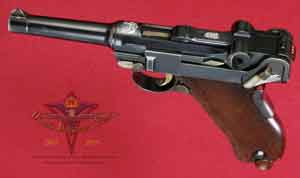 1902 DWM American Eagle "Fat Barrel": This is 9mm Luger, the first commercially available 9mm semi-automatic model in the world. Developed for the 9mmx19mm round we use today this was Georg Luger's genius at work.

1902 American Eagle 9mm Fat Barrel Upon Georg Luger's return from the first US Test Trials he invented the 9x9mm we use to this day. Read more, click More Pictures

All the brands of Lugers are represented, DWM, Erfurt, Simson, Mauser, Krieghoff, Vickers, Swiss, Spandau plus

many holsters, accessories and militaria. Enjoy.

At Phoenix Investment Arms we offer only the finest premium investment grade German Lugers.
Our clients are investors, collectors, and those who simply want to shoot one of the world's most recognized and coveted hand guns.

about what made them the worlds most recognized handgun.